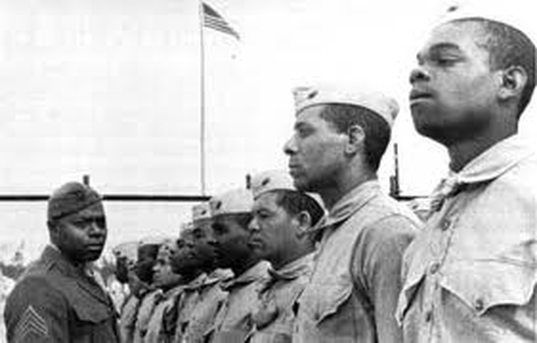 Drill Instructor Gilbert "Hashmark" Johnson drilling Marines. (USMC Archives)
The year 1943 brought eight Montford Point Marines promoted to drill sergeant, and the first time that American military included Montford Point Marines in a newsreel.
﻿
However, Holcomb issued Letter of Instruction 421 which limited the Negroes rights and responsibilities entrusted to them by the Marine Corps.﻿
Letter of Instruction 421, 1943 Classified Letter by S General Thomas Holcomb (PBS.org)
[Click to Enlarge]
Once the men left Montford Point, they were shipped overseas to the Pacific, but not a single one was put into a combat unit. Instead, they were put in the 51st and 52nd Defense Battalions or support companies, whose purpose was to stay out of direct combat. 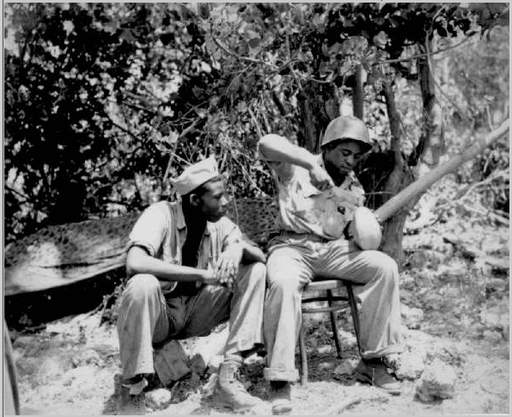 Monford Point Marines waiting to fight. (USMC Archives)
"There are thousands and thousands of Negroes who will make very poor material as labor battalions and mess attendants.  We mean to be fighters, no less."
~ Charles Hamilton Houston, Civil Rights Leader, 1941

The Montford Pointers took full responsibility and performed at the highest combat level eradicating racial myths. Out of the 20,000 trained at Montford Point, 87 were killed in action. At war's end, all but 1,500 were discharged by the government.
"As a high tribute to their wartime record in many parts of the world, Marine Corps authorities have announced that Negro Marines will be retained on a limited scale in the corps."
~ Gertrude S. Carraway and the Cooperation of the Public Information Division of Marine Corps Headquarters and Camp Lejeune Authorities, October 1946